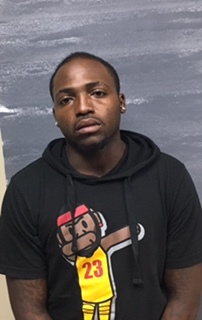 On 09/28/2017 at approximately 6:45 a.m., the Demopolis Police Department responded to an armed robbery call at Sunoco Gas Station on U.S. Hwy 80 West. Director of Public Safety and Police Chief Tommie Reese said that upon Officers arrival they were informed that an unknown black male wearing a mask entered the service station armed with a handgun demanding money from the cashier.

The cashier gave him the money after which he made her sit on the floor before fleeing the store in a vehicle travelling east on U.S. 80. Chief Reese said DPD Officers were able to get a vehicle description from some video footage and from the cashier. It was determined that the suspects fled in a maroon color compact car with a light colored hood, and the vehicle’s tag number started with the number “36.” DPD Officers put out a (BOLO) to all neighboring law enforcement agencies to be on the lookout for this vehicle and the suspects. Reese said approximately twenty-minutes (20) after putting the BOLO out, the Greensboro Police Department assisted by Hale County Sheriff’s Office located the vehicle driving through the intersection of Alabama Hwy 25 and Alabama Hwy 69.

A traffic stop was conducted on the vehicle and the suspects were detained for the Demopolis Police Department. Investigators from the Demopolis Police Department traveled to Greensboro, Alabama to meet with Greensboro Officers on the traffic stop. DPD Investigators were able to determine that these were the suspects involved in the armed robbery through evidence recovered in the vehicle. Both suspects were transported back to Demopolis where they were charged with One (1) Count of Robbery in the First Degree each.

Chief Reese said that he is so thankful the cashier was not injured in this ordeal. He thanked and commended Greensboro Police Chief Mike Hamilton and Hale County Sheriff Kenneth Ellis for the assistance provided by their departments and also commended DPD Officers and Investigators for a job well done.