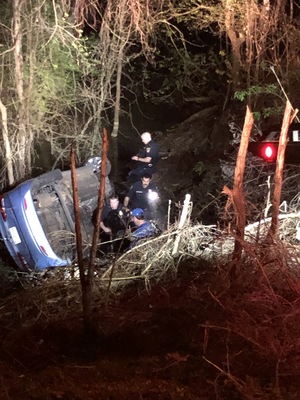 On March 22,2019 at approximately 11:00pm,  Demopolis Police attempted to make a traffic stop on a Blue Hyundai near the intersection of Walnut Avenue and Pettus Street. After the officer activated his blue lights the vehicle fled West on Pettus Street at a high rate of speed. As the vehicle approached the dead end of West Pettus Street it drove off into the canal coming to rest on its side. The driver exited the vehicle and fled on foot. Demopolis Fire and Rescue and Amstar were called to the scene and two passengers were transported to Bryan Whitfield Memorial Hospital for minor injuries. The Driver was later located by DPD Officers in the Canal near the River and taken into custody and transported to the hospital for treatment. After further investigation, Officers arrested the following subjects in connection with this incident.

1. Anthony Lamar Wilder, 18, of Detroit,Michigan for Duty to give information and render first aid at an accident with Phyiscal Injuries, Attempting to Elude Law Enforcement, Possession of Marijuana Second Degree and Driving under the Influence.

I would like to personally thank the  ALEA Marine Division , Tuscaloosa County Sheriff's Office and the 17th Judicial Drug Task Force for offering and providing their assistance and Thank God that no one seriously injured in this Incident.